“Lately, my world’s been movin’ way too fast.  I need to slow down and catch up with some of the past.  Maybe go back home and stay for a week or two.  I’m takin’ some old things and makin’ ’em new.”  – That’s some Joe Nichols right there, love him!

It’s been a little while since a post so I figured I try and catch up on some of the stuff we’ve been doing around the house.  Let’s see, in the last 2-3 weeks we’ve moved out of the apartment and fully moved into the house.  It was quite the event, but with the help of the best friends anyone could ask for it wasn’t toooo terrible. 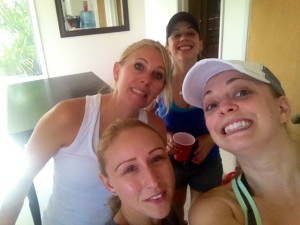 The house is still a construction zone (construction hat recommended) with our living room temporarily in the 2nd bedroom and one bathroom in the process of a demo.  We’ve also got most of our tools in the actual living room, which will have to be cleared out this week as we just bought the wood for the living room floors!  (install is this weekend, I am so excited for this because it means we’ll actually get to start unpacking!!).

The kitchen is coming along.  We stripped the wallpaper, re-textured the walls, and painted it a light blue.  We’ve been slowly painting the cabinets white and unpacking utensils and plates and stuff.  We also bought a fridge!  It was a great deal! 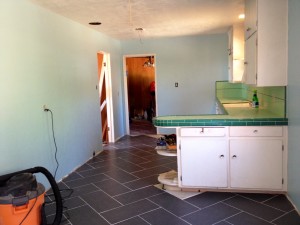 The front lawn area is still a mess but we are getting a new dumpster today to alleviate that problem.  YES, finally! 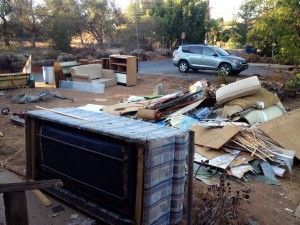 So what you’re seeing here is called the Danger Zone!  Lol it’s not actually dangerous but it sure looks horrendous.  The previous owner of the house was kind enough to leave us not just one couch, but two!  We are so lucky…  We also inherited lots of fire wood, shelving and other random trash.  We do take credit for the demo pile though 🙂 .  When all this stuff gets thrown out, we’re planning on growing some grass and fencing off this upper portion of the yard so Rory will have a nice, safe place to play.

Finally, one of my favorite things about the house is our old-made-new flower chandelier! 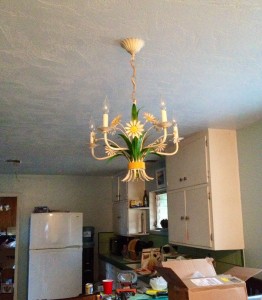 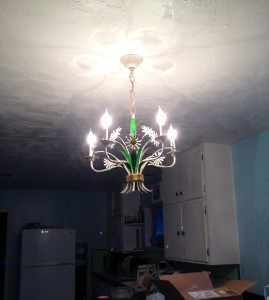 Some of you might recognize this little beauty because we actually took it from our old apartment!  Here’s the back story, back in the day my grandparents bought a duplex when they got married.  My grandma’s mother and father lived in the apartment below their actual house.  (This is the same apartment Nathaniel and I were living in this past year).  This chandelier was my great grandparents annnd we found a tag on it that says “made in Italy” (my great grandparents are from Sicily, I know crazy coincidence!).  Now I’ve asked around and no one seems to remember if this was actually something my great grandparents brought over from Italy when they moved to the U.S.   But since no one knows, I’m just going to assume they did because it would be a pretty cool story if it was true!  So anyhow, this is our flower chandelier and we’re going to keep it for-ev-er.  🙂